skip to main | skip to sidebar

An Artist's Residence in Lawrence Kansas 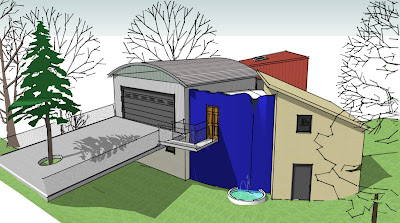 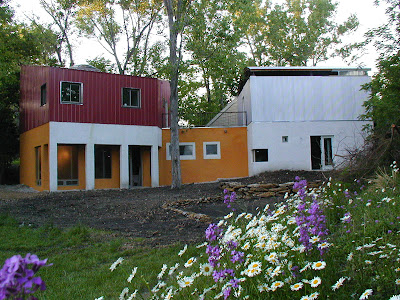 This is the construction of the Artist house in Lawrence Kansas.
It uses several different types of construction types. The main house is of RASTRA, the upper floors are steel frame, the roof and exterior cladding is metal and the lower floors are stucco. there is a roof terrace with a rubber roof, there are recycled materials throughout and the whole job was done on a tight budget.
The design concept was to separate the building into different functions and shapes to break down the scale. One problem to be solved was the spanning of a drainage ditch from the street through a group of trees, so we built a bridge of railroad beams and concrete for the second story garage, leaving a hole for one of the pine trees in the driveway.
The bedroom below the garage also serves as the tornado safe room. 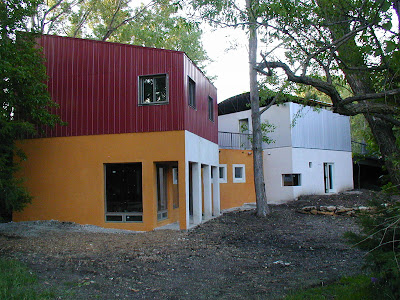 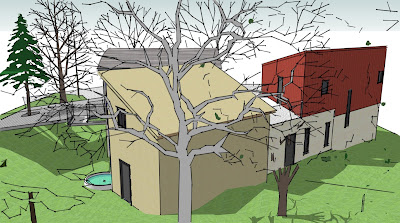 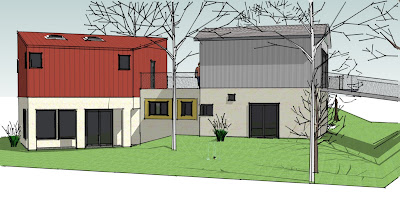 THE FLYBY
Posted by global homes design inc at 11:52 PM No comments: 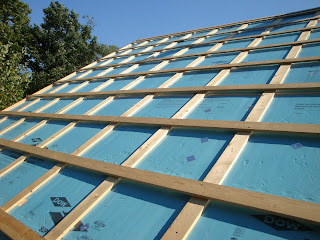 This is a cool roof installation we did last year-starting with Thermax insulation board with a radiant foil backing over the existing asphalt shingles and furring strips vertically over the rafters. 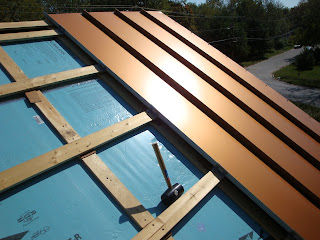 Then we install furring strip(1x4) horizontally `over that. This gives you toe boards as well, and facilitates air flow from ridge to peak. 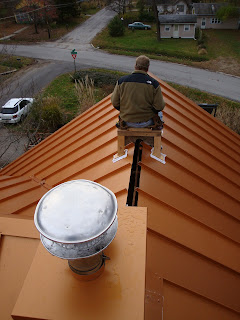 Here we are putting on the ridge cap with a little rigde horse we made for this purpose. 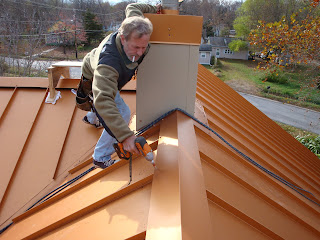 Posted by global homes design inc at 8:37 PM No comments: 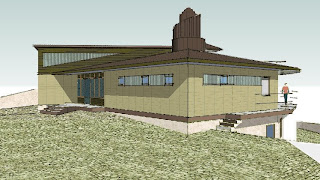 The Spiral Rancher. Here is a Fly by of a house we designed last year as a passive solar, wood heated, solar chimney cooled, wind powered house on the top of a bluff overlooking Perry Lake in Northeast Kansas.

And a house for an urban infill lot on a corner in an undesirable area of town to screen off the neighbors and create a tranquil space in a city setting. We call this one The Fence House, and it is passive and active solar, and produces enough electricity to be zero energy, has radiant floors, a loft space for kids, and a car/bike port for a quick ride to the center. It was designed for a lot at 12th and Haskell in Lawrence Ks. 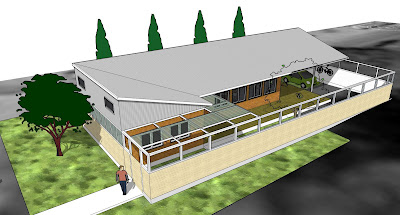 Posted by global homes design inc at 2:55 PM No comments:

Use for surplus equipment in Iraq 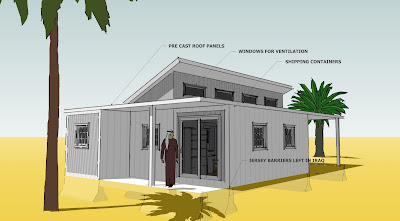 I heard the story on NPR today about all the surplus equipment and supplies, including tons of concrete barriers that will be left behind as we start to withdraw troops. One Idea I had was to use the concrete barriers as foundations for houses to leave the Iraqis, instead of a mountain of trash.
The standard road barrier is an excellent foundation block, and shipping containers can be used as houses with just a few modifications.
Turning lemons into lemonade!
I don't know the soil conditions there, but it seems if they have a compaction of 2000 lbs/ft, it would work. The other thing there should be a surplus of is shipping containers. Old humvees, and suburbans should be plentiful as well, and those could be turned into solar panels, or compact living arrangements if cut and welded together.

Excuse me I digress. It is typical of people to want to waste if they have the chance. The thing I don't understand about my Latino workers is that they love to waste materials, money on lunch, cokes and cars, clothes etc. It must be the new found status in not being forced into conservation.
It is the good life, and therefor I don't care, because I can afford it. This is the mindset we have to change. For example what if we were to convince all the new wealthy folks that it was pulling down their status to be wasteful. It is expensive to be poor. The longer a family has money, it seems, the less important it is to show it. Old Money contra New money.
Hmm, how do we do it?
Having stuff weighs you down, makes you less able to adapt. If you need something- rent it, and let someone else have the headache of storing, maintaining, and selling it later for less than paid.
Shipping containers must be the perfect form of housing. If we want to move, we just pack everything inside, send it off, unpack it and move in. Just like the push button house: http://www.architectureandhygiene.com/PBHouse/PBH.html actually it was Donald Duck that popularized the push button house when he was camping with Pluto.
Her are the plans for a 750 Sf house that we are building in Kansas, that has been modified to meet the climate in the desert. 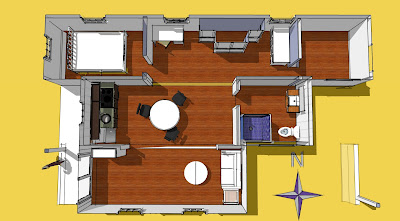 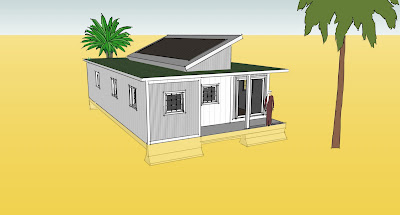 It would be made of insulated containers with a insulated concrete cap poured on top to help hold then down and keep some thermal mass between you and the sun.
This should cost aroung 10,000 to put up and anothe r10,000 to finish. Not bad for 750 SF. In case you were wondering.
anyway I'm turning into a pumpkin, so we'll keep you posted another day.
Posted by global homes design inc at 7:44 PM 1 comment:

BUILDING WITH RASTRA IN KANSAS 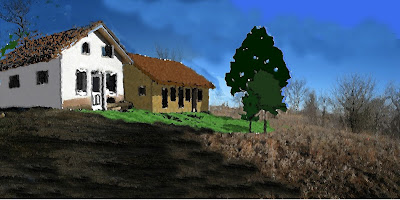 This is a small Rastra project North of Lawrence, Kansas.
We are designing it and building it for the O'Brien's, a couple that want to have a quiet cottage in the country and grow their own food, collect rainwater, and live life as sustainable as possible.
The white building is an existing timber frame/straw bale, and clay slip house with no electricity or plumbing they built a few years ago, while deciding what to do with the property. We worked with them placing the other building near the original building while keeping to itself. 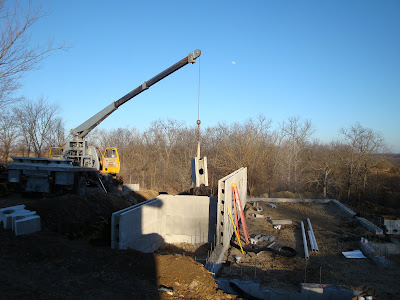 Here are the walls going up with the 12 x 30 x 120 inch Rastra blocks. They weigh about 400 pounds apiece, so we lift them with a boom truck, glue them together, plumb them and fill them with concrete and rebar. 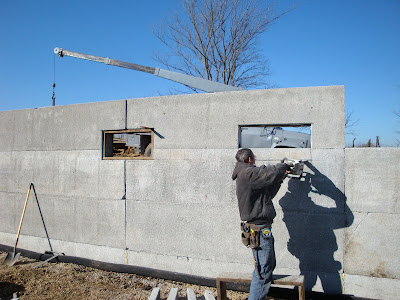 You can cut the windows and doors out with a chainsaw. 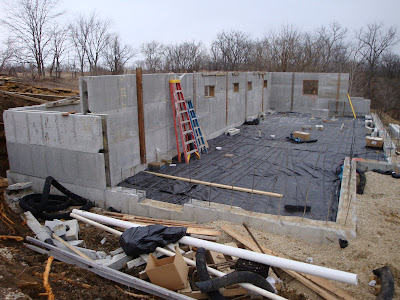 We are putting a radiant floor slab in, so we insulated the slab with thermal blankets and poured the slab against the Rastra stem wall for a thermal break to the outside. 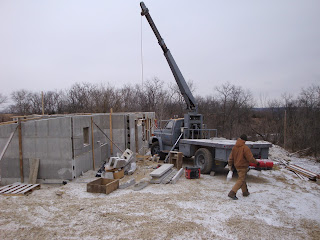 The boom truck replaces at least 3-4 strong guys, and it doesn't stop for lunch. 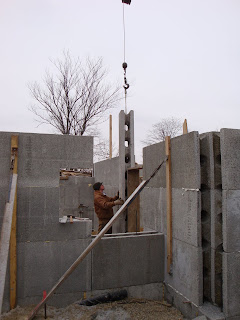 Setting a panel in vertically sometimes comes in handy when you come to a large window or door. The cores line up either way. 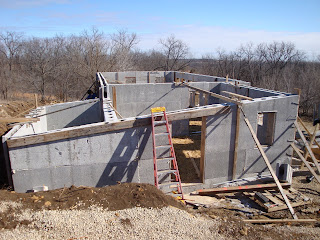 We are now ready to pour the first lift with concrete. The sloped walls will have a suspended slab poured on them for a living roof over the utility area and the cistern on the left.

Labels: green building at its greenest, Rastra in Kansas, the O'brien house 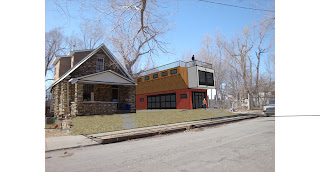 Posted by global homes design inc at 10:47 PM No comments: 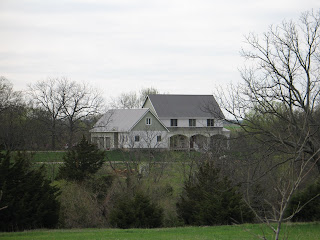 This a remodel and addition to a cabin near KC 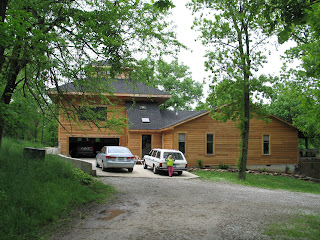 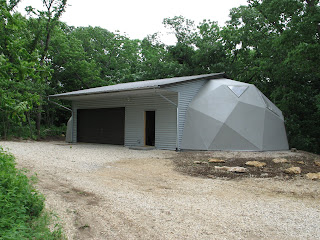 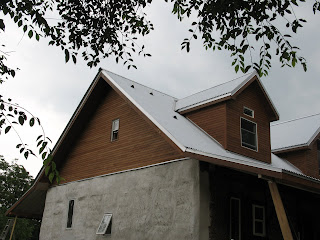 and a Hybrid Straw bale.

These are a few projects we have done in the past few years in and around Lawrence, Kansas and Kansas City. We design and build everything we do, and have been doing the green thing since it was brown. Call us for the greenest solution in the midwest.
GLOBAL HOMES DESIGN INC. 785 594 4115 globalhomesdesign@gmail.com